Chicago, IL (June 21, 2016): One way the nation’s largest privately-held homebuilder has celebrated its 40th anniversary this year is by hosting David Weekley Homes World’s Largest Parade of Homes. From April 1-30, more than 7,200 visitors stopped by model or showcase homes across the country to see current innovations in design and décor trends. As part of the company’s charitable and philanthropic efforts, local nonprofit organizations received a donation in honor of this milestone.

A $5 donation was given to a local nonprofit organization for each visitor who registered with a sales consultant during David Weekley Homes World’s Largest Parade of Homes, amounting to more than $36,000 for 19 local charities. In Chicago, $275 was donated to Big Brothers Big Sisters of America.

“We really appreciate being part of the David Weekley Homes World’s Largest Parade of Homes and look forward to partnering with the company in the future,” said Colleen Kelly, Director of Special Events, Big Brothers Big Sisters of Metropolitan Chicago.

The monetary gifts are an initiative of the company’s CARE program that joins team members with homeowners, homebuyers, community partners and local nonprofit organizations to live out its purpose, Building Dreams, Enhancing Lives in all the communities in which it builds. This is accomplished by team members volunteering countless hours to different organizations in their communities and by The David Weekley Family Foundation donating more than $100 million to a variety of organizations throughout the U.S. and abroad over the past 20 years.

“It was so great to be able to meet the managers at Big Brothers Big Sisters of Metropolitan Chicago,” said Dianne Lombardi, Purchasing Coordinator with David Weekley Homes. “They were so pleased to be a part of this event.”

For more information about David Weekley Homes, or to find a community in Chicago, visit www.davidweekleyhomes.com.

For more than 100 years, Big Brothers Big Sisters of America has provided children facing adversity with strong and enduring, professionally supported one-to-one relationships that change their lives for the better. The organization works to develop positive relationships that have a direct and lasting effect on the lives of young people. 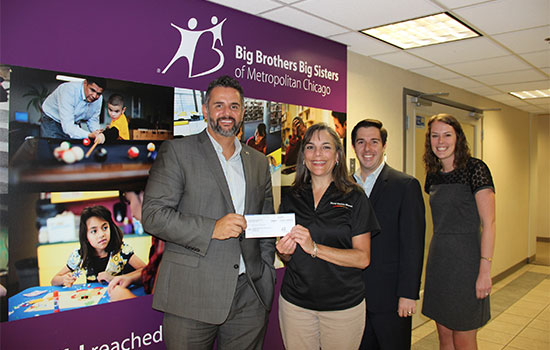