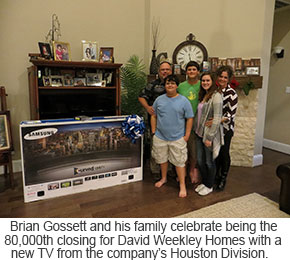 Houston, TX (December 30, 2015): David Weekley Homes, the nation’s largest privately-held home builder has achieved another incredible milestone in the company’s history with their 80,000th home closing, and in the city where the company was founded 40 years ago: Houston.

As a company that prides ourselves on Building Dreams, Enhancing Lives, it is an honor to have made the dream of homeownership come true for 80,000 families,” said David Weekley, Chairman of David Weekley Homes. “Our 80,000th closing represents what is great about this company and the level of dedication our Team Members have to building high-quality homes for families to enjoy for many years.

Weekley’s 80,000th home was purchased by the Gossett family in the north Houston suburban community of Villages of NorthPointe in Tomball. For the Gossett family, including Brian and his wife, Joy, and their three children, this was a milestone that very nearly didn’t happen for them.

"We didn’t intend to purchase the home we now live in!” said dad Brian Gossett. “We signed a contract to build in another part of the community, but ended up pulling out of the contract due to timing issues with the build process. We told our sales consultant to let us know if anything else became available.

“Literally the next day, the sales consultant called us and said a home that was just finished and was now available,” Gossett said. “It was the exact floor plan that we wanted, in a cul-de-sac like wanted and had everything we were looking for. We signed the new contract and before we knew it, it was moving day!”

To commemorate this special occasion, David Weekley’s Houston Division surprised the Gossett’s with a 65-inch 4K TV for their media room in their new home.

“We are very honored to be David Weekley’s 80,000th homeowner and were surprised to receive such an incredible gift,” Gossett said. “The new television is a gift that is beyond anything we could have imagined, and we are blessed and so touched by the company’s gesture. Although we’re touched to be part of this milestone for the company, the fact that we’re the 80,000th Homeowner says a lot about your product in selling that many homes."