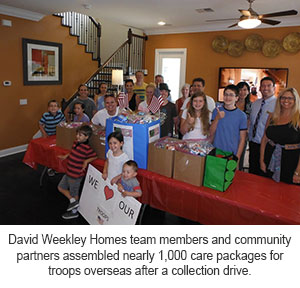 After collecting the hundreds of pounds of items, David Weekley Homes team members and helpers spent hours assembling the care packages with snacks, candy and toiletries for USO Central Florida. The USO seeks to lift the spirit of troops and their families by providing care packages to U.S. soldiers in even the most remote corners of the globe.

Proud of their efforts in doubling their anticipated goal, the David Weekley Homes Family Foundation also donated a check for $10,000 to the USO of Central Florida.

As part of its culture, David Weekley Homes strives to make a positive impact in the lives of everyone it touches and in all the communities it builds through its purpose, Building Dreams, Enhancing Lives. This is accomplished by company team members volunteering countless hours to different organizations in their communities and by the Weekley Family Foundation donating more than $100 million to a variety of organizations through the U.S. and abroad since 1976.