Orlando, FL (August 17, 2016): David Weekley Homes, the nation’s largest privately-held home builder, collected and donated items to benefit the newly-opened Ronald McDonald House at Nemours Children’s Hospital. The Nemours home will allow the organization to house up to 74 families per day for families who have a child undergoing medical treatment.

From July 1 to July 31, 2016, David Weekley Homes collected donations in its Orlando communities of Laureate Park at Lake Nona and Oakland Park. With the help of team members and homeowners, an array of nonperishable items such as paper towels, paper plates, coffee, condiments, cleaning supplies and much more was collected to benefit Ronald McDonald House at Nemours Children’s Hospital.

“We love being able to contribute to the brand new Ronald McDonald House at Nemours Children’s Hospital and look forward to continuing our partnership with them,” said Jackie Filippi, a sales consultant with David Weekley Homes. 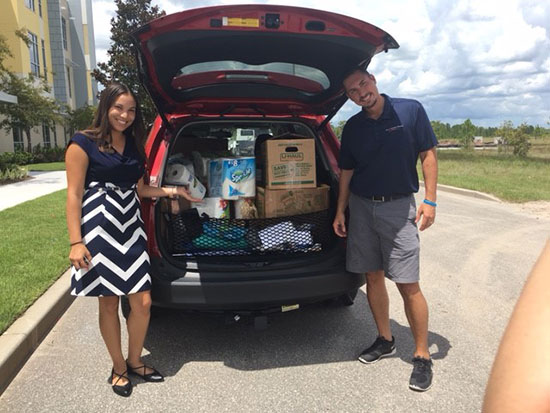 Donations were dropped off at the new Ronald McDonald House at Nemours Children’s Hospital during the grand opening ceremony and ribbon cutting on Thursday, August 11.

The drive was an initiative of the company’s CARE program, which is a charitable and volunteer program that joins team members with homeowners, homebuyers, community partners and local nonprofit organizations to live out its purpose, Building Dreams, Enhancing Lives in all the communities in which it builds. This is accomplished by company team members volunteering countless hours to different organizations in their communities and by The David Weekley Family Foundation donating more than $100 million to a variety of organizations throughout the U.S. and abroad over the past 20 years.

David Weekley Homes, the nation’s largest privately-held home builder, is celebrating its 40th anniversary in 2016. Headquartered in Houston, the company operates in 24 cities and 13 states across the United States. David Weekley Homes was the first builder in the United States to be awarded the Triple Crown of American Home Building, an honor which includes “America’s Best Builder,” “National Housing Quality Award” and “National Builder of the Year.” David Weekley Homes has also appeared nine times on FORTUNE magazine’s “100 Best Companies to Work For®” list. Since 1976, the company has closed more than 80,000 homes. For more information, visit www.davidweekleyhomes.com.