In Houston, nearly 15,400 pounds of nonperishable items were collected during the two-week drive, which ran from November 1 to 15.

“Our team members were very selfless in their giving and excited to contribute to such a great cause!” said James Boone, construction manager for David Weekley Homes. “We hosted a Fall Festival celebration at our corporate office, and our team members who worked so hard to collect food items got to watch the presentation of the food and monetary donations to Houston Food Bank representatives. The food truck at the event even donated a portion of their profits to the organization!”

Locally, the Giving Thanks, Giving Back Thanksgiving Drive benefitted Houston Food Bank, a nonprofit that provides nutritious meals to food pantries, soup kitchens, senior centers and other agencies in 18 southeast Texas counties. David Weekley team members provided the collected items to Houston Food Bank to distribute to families in time for the holiday. In addition to the nonperishables, The David Weekley Family Foundation also donated almost $20,000 for a new refrigeration system.

“In this season of thankfulness, we are grateful for the generosity and commitment of David Weekley Homes and all of the team members that contributed to the annual drive,” said Brian Greene, president and CEO of Houston Food Bank. “The donations that were received will be utilized in our Share Your Holiday boxes to benefit over 40,000 families in need in 18 counties. We extend our sincere gratitude for your continued support this holiday season.” 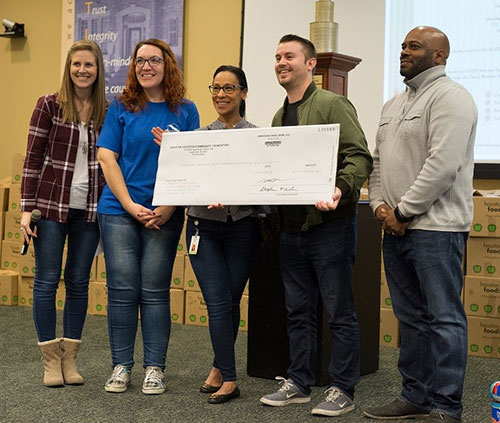