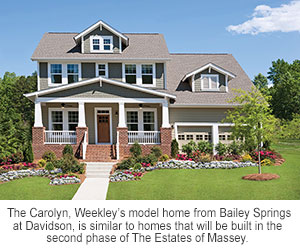 Charlotte, NC (June 24, 2015): David Weekley Homes, the nation’s largest privately-held builder, has closed on two new land deals that will add more than 250 new homes to the Charlotte market in 2016. The land deals make a $20 million investment in the Charlotte real estate market, which is the second-fastest growing city in the U.S., according to the U.S. Census Bureau.

The larger of the two land deals is for 161 homesites in the already-established community of The Estates of Massey. Located in Fort Mill, David Weekley Homes has already sold more than 70 homes in The Estates of Massey since opening phase one in summer 2012. During phase two, the builder will offer two new product lines, and will adapt current offerings to complement the one- and two-story homes already in the community. New model homes for phase two are expected to open in Spring 2016.

“We are investing in great Charlotte locations where people want to live,” said Mark Gibbs, Charlotte division president for David Weekley Homes. “These new communities will help us continue out commitment to build our customers’ dream homes, and offer both communities and homes that enhance our customers’ lives.”

David Weekley Homes is also excited to announce the acquisition of land for a community in Matthews. Weekley Homes closed on the land for Eden Hall in May and is expected to open for sales in 2016.

Eden Hall, a 90-homsite community, will feature three one- and two-story, attached home designs, ranging in size from 1,700 to more than 3,000 square feet, with downstairs owner’s retreats. Eden Hall homeowners will have access to an extensive internal trail system around the existing lake, all connected to the Matthews Trail walking system and downtown Matthews.

For more information about David Weekley Homes in Charlotte, contact 800-393-9968.