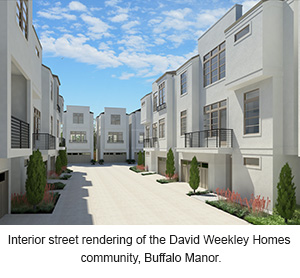 Showcasing the best of what Buffalo Manor has to offer, The Stoneyfield model features three bedrooms, three full baths and one half bath within three stories and more than 2,000 square feet. Overlooking the dining and family rooms, the kitchen includes an oversized island, golden paradise granite countertops and under-cabinet lighting.

Each of the homes in this community feature stucco exteriors and contemporary iron railings, as well as 11-foot ceilings on the main living floor and in the owner’s retreat.

Buffalo Manor is situated just north of 610 South and west of Buffalo Speedway and between South Main Street and Murworth Drive, and offers easy access to such local attractions as NRG Stadium, the Houston Zoo and the Museum District.

David Weekley began building in Central Houston in 2008, and has since built new homes in more than 30 communities in and around The Heights, Rice Military, the Galleria area, Washington, Montrose, Midtown, Garden Oaks and the Spring Branch area.