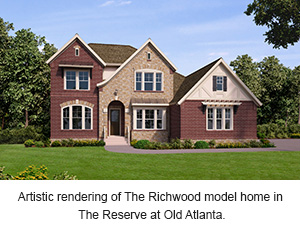 ATLANTA, GA (September 29, 2015): Custom Classics by David Weekley Homes has opened a new model home, The Richwood, in the Suwanee community of The Reserve at Old Atlanta.

The Richwood is a two-story home with 4,337 square feet of living space, which does not include the home’s unfinished basement. This open concept floor plan includes five bedrooms, including two owner’s retreats, five full baths, one half baths, two-story family room, retreat and media room and an outdoor living area featuring a covered porch with a fireplace that is accessible through the sliding doors from the family room.

Buyers in The Reserve at Old Atlanta can choose from seven different floor plans ranging in size from 3,300 to 4,300 square feet. Priced from the $565s, the homes feature Old World-inspired exteriors with four to six bedrooms with both upstairs and downstairs owner’s retreats options, three to six full baths, three-car garages and optional basements.