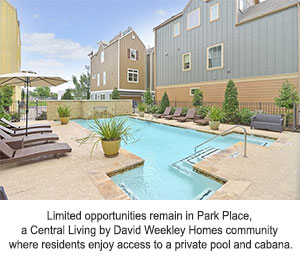 Houston, TX (August 14, 2015): Only seven opportunities remain in Park Place, a Central Living by David Weekley Homes community in the historic Houston Heights. Homebuyers may choose from six distinct three- and four-story floor plans, ranging in size from 1, 500 to 2,000 square feet and starting from the $400s, in the final phase of this private, gated community.

In addition to a convenient inner Loop location, Park Place features a residents-only pool with cabana and easy access to Lawrence Park. Homeowners also enjoy nearby walking and jogging trails and sports fields.

David Weekley Homes, the nation’s largest privately-held builder, has been building in Central Houston since 2008, creating urban communities throughout some of the city’s most sought-after neighborhoods. The Houston Heights, commonly referred to as “The Heights,” is a community that dates back to the late 1800s and was annexed by Houston in 1919. It is widely-known for its beautiful Victorian homes, Craftsman-style bungalows and eclectic mom-and-pop retail shops.

For more information about David Weekley homes in Park Place, visit the sales office at 715 Dorothy Street, or call 281-249-7719.