Dallas, TX (September 6, 2016): David Weekley Homes hosted its second annual companywide Back to School Supply Drive in 22 cities across the country. In Dallas, school supplies were collected for Communities in Schools of North Texas, an organization that surrounds students with a community of support to encourage them to excel in life through continued education.

“As the cost of public education is on the rise, families are limited in what they can afford to send their children back to school – and many just have to make do,” said Monica Ordonez, Senior Director of Strategic Partnerships & External Affairs, Communities in Schools of the Dallas Region. “David Weekley Homes answered the call that will tip the scales for so many children heading back to school. We appreciate and thank them for being their champion and setting the bar high for us all.”

Items valued at nearly $2,000 were collected during the drive, which benefited 200 children. After collecting the donations, team members invested 10 hours sorting the supplies and delivering them to the organization to ensure the supplies would be distributed in time for the students to begin school with the tools needed to be successful.

“It’s such a rewarding feeling for our team to be able to participate in helping so many parents and school children with back to school supplies,” said Ken McDonald, Area President with David Weekley Homes. “Education in our communities is critical and it’s nice to know we are able to lessen the burden with our donations.”

The drive was an  initiative of the company’s CARE program, which is a charitable and volunteer program that partners team members with homeowners, homebuyers and community partners with nonprofit organizations to make a positive impact in the lives of everyone it touches and in all the communities it builds through its purpose, Building Dreams, Enhancing Lives. This is accomplished by company team members volunteering countless hours to different organizations in their communities and by The David Weekley Family Foundation donating more than $100 million to a variety of organizations through the U.S. and abroad over the past 20 years.

About Communities in Schools of North Texas

Communities in Schools of North Texas is an organization that surrounds students with a community of support to encourage them to excel in life through continued education.

David Weekley Homes, the nation’s largest privately-held home builder, is celebrating its 40th anniversary in 2016. Headquartered in Houston, the company operates in 23 cities and 13 states across the United States. David Weekley Homes was the first builder in the United States to be awarded the Triple Crown of American Home Building, an honor which includes “America’s Best Builder,” “National Housing Quality Award” and “National Builder of the Year.” David Weekley Homes has also appeared nine times on FORTUNE magazine’s “100 Best Companies to Work For®” list. Since 1976, the company has closed more than 80,000 homes. For more information, visit www.davidweekleyhomes.com. 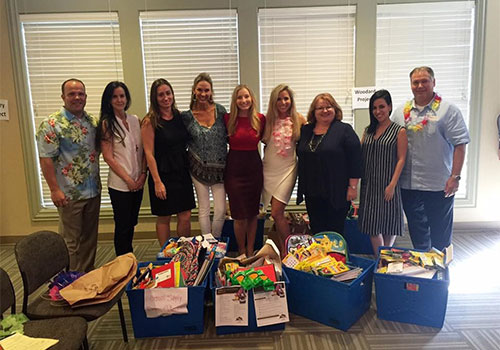 Communities in Schools of North Texas is an organization that surrounds students with a community of support to encourage them to excel in life through continued education.