Open floor plans continue to be one of the dominant trends in house design and architecture. Open floor plans are a design element joining at least two rooms, creating one larger space. An open floor plan commonly joins any two, or all three, of the kitchen, dining, and Family Room. 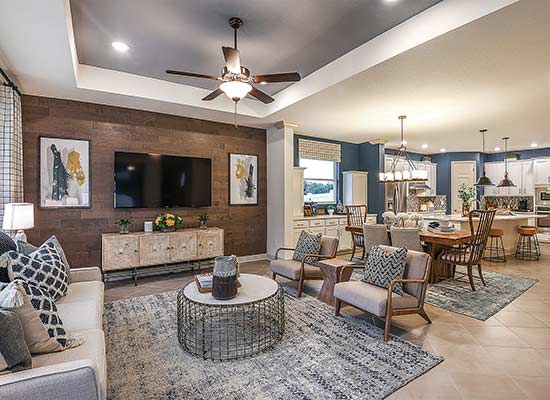 Open floor plans emerged as the social and practical functions of the home evolved. Traditional American homes of previous generations were relatively formal with each blocked-off section of the home serving a specific function. Food being prepared in the kitchen left it off-limits to anyone not involved. The Family Room was for entertainment and the dining room served as a place for families, or a small number of guests, to eat.

As society moved toward a less formal feel for the home, Homeowners looked for ways to connect the three rooms, allowing parents to tend to their children while preparing food. Eventually, the home became a gathering space for large groups of friends and family.

As a staple of the modern home, improved construction techniques and materials have made open floor plans a design feature that’s desired for both aesthetics and function. Here are a few reasons why some of our Homeowners prefer an open floor plan:

One of the most popular features of our homes are the open floor plans – and for good reason. They establish a sense of community within the home that many families value above all.

What Can Sight Lines Do?

The Art of Creating Your Dream Home

Liven Up Your Home with Windows & Light

Sign up to receive our email updates, and be the first to know what’s happening in your area!