Charlotte, NC (February 1, 2018): Central Living by David Weekley Homes, the high-density division of David Weekley Homes, is proud to announce the grand opening of a new model home, The Brewington, in the Uptown-area community of Carson. The Georgetown-inspired townhomes in this community are priced from the $885s.

The Brewington is a four-story townhome with nearly 2,900 square feet, and includes three bedrooms, three full baths, one half bath, a two-car garage and a fourth-floor rooftop terrace with views of the Uptown Charlotte skyline. The model home also features a wet bar and extended utility room.

Once completed, Carson will feature 11 townhomes within walking distance to the LYNX Light Rail Carson Station, Bank of America Stadium and Uptown Charlotte. This community is also convenient to major employment centers, restaurants, nightlife, shopping and entertainment. Commuters have nearby access to the LYNX Light Rail System stations and major roadways such as I-277, I-77 and South Boulevard.

Tours of the new model home are available by appointment only by calling 704-972-4222. For more information about homes in Carson, visit DavidWeekleyHomes.com. 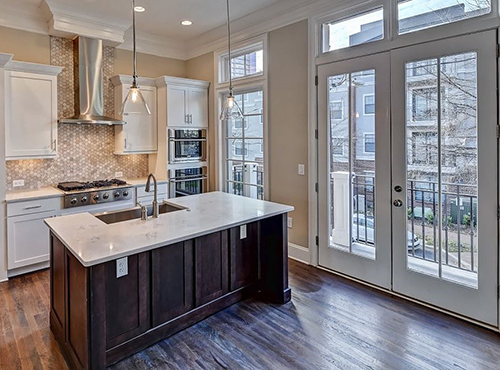 The Brewington is now open for tours in Carson.