Orlando, FL (January 8, 2019): David Weekley Homes, the nation’s largest privately-held builder, is celebrating 25 years of home building in Orlando in 2019. The company was founded in Houston, TX, in 1976 and expanded to Orlando in 1994 as the first home builder selected for Walt Disney Company’s renowned master-planned community, Celebration.

Over the company’s 25 years in Orlando, it has enjoyed several notable milestones:


“It’s been an immense honor to create the special places that our customers call home for the last 25 years in Orlando,” said Brent Bartholomew, division president for David Weekley Homes in Orlando. “Along the way we’ve had the opportunity to grow an incredible team, be a part of building stunning communities and enhance the lives of not only our customers, but also those in the communities where we work and live through our volunteer outreach. We’re building on a strong foundation, and the company’s future in Orlando is bright.”

In addition to its commitment to excellence in home building and customer satisfaction, David Weekley Homes prides itself on enhancing lives beyond the walls of the workplace. Giving back is at the heart of the David Weekley Homes culture. The company’s robust outreach program, CARE, is a charitable and volunteer program that joins team members with homeowners, homebuyers, community partners and local nonprofit organizations to live out the company’s purpose, Building Dreams, Enhancing Lives. This is accomplished by team members volunteering countless hours to different organizations in their communities and The David Weekley Family Foundation donating more than $200 million to a variety of organizations through the U.S. and abroad over the past 20 years.

For more information about David Weekley Homes in Orlando, contact 407-478-5933. 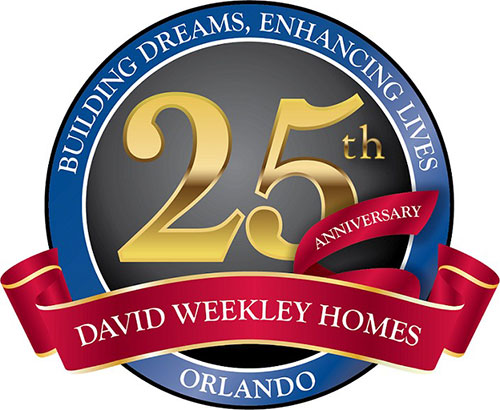 David Weekley Homes is celebrating its 25th anniversary in Orlando throughout 2019.