As part of the company’s philanthropic efforts through its CARE program, the Orlando Division partnered with vendors, homeowners, realtors and developer partners to collect such items as instant coffee, protein powder, granola bars, travel-size toiletries, magazines, batteries, books and more.

In addition to the collection drive, The David Weekley Family Foundation made a $10,000 donation toward the cost of the USO Central Florida’s Welcome Center at Orlando International Airport. The new welcome center will provide a living room with large screen TV’s, a children space, game station, snack bar and more for U.S. servicemen and women, and their families to rest and regroup while traveling in the Orlando area.

The drive is an initiative of the company’s CARE program, which is a charitable and volunteer program that joins team members with homeowners, homebuyers, community partners and local nonprofit organizations to live out its purpose, Building Dreams, Enhancing Lives in all the communities in which it builds. This is accomplished by company team members volunteering countless hours to different organizations in their communities and by The David Weekley Family Foundation donating more than $100 million to a variety of organizations throughout the U.S. and abroad over the past 20 years. 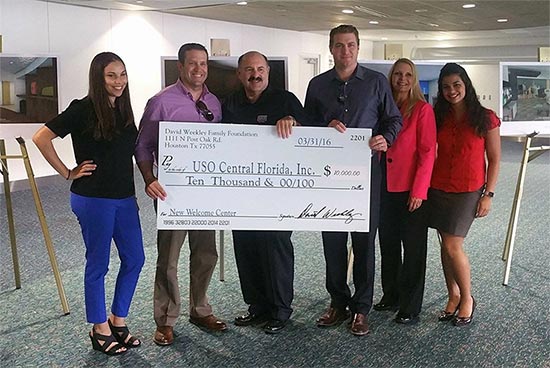