Team Members collect nearly 1,500 pounds of food for the holiday

Locally, more than 480 pounds of turkey, nearly 1,000 pounds of nonperishable items and $3,800 in monetary donations were collected during the two-week drive, which ran from November 2 to 16. Orlando team members delivered the items to the organization to distribute to families in time for the holiday, equating to more than 16,500 meals.

“It was special to see everyone making donations – two young ladies dropped off boxes of donations they collected while trick or treating,” said Jackie Filippi, Orlando sales consultant with David Weekley Homes. “We are grateful for their act of selflessness.”

In Orlando, the Thanksgiving Drive benefitted Second Harvest Food Bank of Central Florida, an organization that distributes tens of millions of meals per year to the clients of more than 550 local nonprofit feeding programs.

“Thanks to the hard work and generosity by everyone at David Weekley Homes, so many kids, seniors, and families will be able to sit down to warm, nutritious meals,” said Dave Krepcho, president/CEO at Second Harvest Food Bank of Central Florida. “It is thanks to these amazing community partners we are able to make a difference in thousands of lives every single day.”

The Thanksgiving Drive is one of the initiatives of the company’s CARE program that joins team members with homeowners, homebuyers, community partners and local nonprofit organizations to live out its purpose of building dreams, enhancing lives in all of the communities in which it builds. 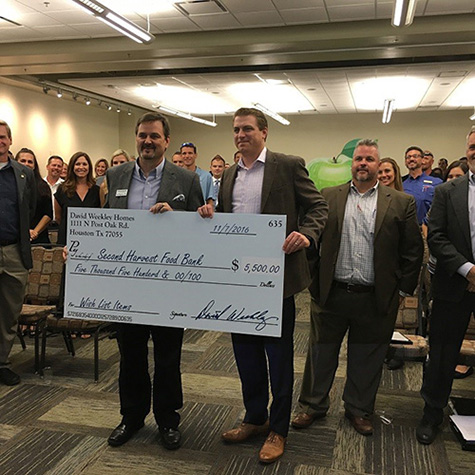 Second Harvest Food Bank of Central Florida is a private, nonprofit organization that collects, stores and distributes donated food to more than 550 feeding partners in six Central Florida counties. Our mission is to create hope and nourish lives through a powerful hunger relief network, while multiplying the generosity of a caring community.

David Weekley Homes, the nation’s largest privately-held home builder, is celebrating its 40th anniversary in 2016. Headquartered in Houston, the company operates in 23 cities and 13 states across the United States. David Weekley Homes was the first builder in the United States to be awarded the Triple Crown of American Home Building, an honor which includes “America’s Best Builder,” “National Housing Quality Award” and “National Builder of the Year.” David Weekley Homes has also appeared 10 times on FORTUNE magazine’s “100 Best Companies to Work For®” list. Since 1976, the company has closed more than 80,000 homes. For more information, visit www.davidweekleyhomes.com.