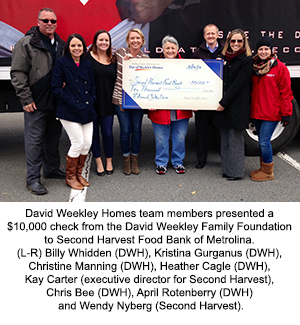 Charlotte, NC (November 17, 2014): Now in its eighth year, David Weekley Homes and members of the Charlotte community partnered up for an annual Turkey Drive to donate nearly $20,000 and 467 turkeys to Second Harvest Food Bank of Metrolina to help feed families in need this holiday season. The monetary donation will allow the charity to purchase an additional 1,000 turkeys, bringing the total donation to nearly 2,500 turkeys.

“We already know we build in some amazing communities in Charlotte, but we’re humbled every year at the incredible generosity of our homeowners, our team members and our builder partners with their donations to our Turkey Drive to help Second Harvest Food Bank of Metrolina care for those in need,” said Mark Gibbs, division president for David Weekley Homes.

David Weekley Homes surpassed last year’s record-setting efforts of more than 1,200 turkeys (or monetary equivalent) and surpassed this year’s goal of 1,500. To reach this feat, Weekley Homes reached out to business partners, team members, vendors, friends, family and homeowners. Weekley staff collected frozen turkeys and monetary donations during their Turkey Drive on Wednesday, November 5, and at various community events through Sunday, November 9. Upon approaching their goal of raising $10,000 in donations, the David Weekley Family Foundation provided an additional $10,000 donation to reach nearly $20,000.

All turkeys and money donated will be given to the Second Harvest Food Bank of Metrolina, the largest hunger relief charity in the surrounding area. The food bank strives to use education, advocacy and partnerships to eliminate hunger by the solicitation and distribution of food. In the Metrolina area, 18.4% of the population lives in poverty, including almost 221,000 children and seniors. To assist those in need, Second Harvest Food Bank of Metrolina supplies a network of almost 650 non-profit agencies in 19 counties with food and essential grocery products.