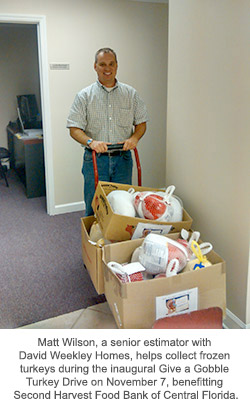 Orlando, FL (November 11, 2014): David Weekley Homes wrapped up their first-ever Give a Gobble Turkey Drive in Orlando by collecting more than 1,100 pounds of frozen turkeys and $18,000 in monetary donations, all benefitting Second Harvest Food Bank of Central Florida. For every dollar donated, Second Harvest Food Bank can purchase $9 worth of food, bringing the value of the donations to $169,000.

To reach this feat, David Weekley Homes reached out to business partners, team members, vendors, friends, family and homeowners. Online donations were made throughout the campaign, but Weekley staff collected frozen turkeys and monetary donations during the Give a Gobble Turkey Drive on Friday, November 7. Upon reaching $10,000 in donations and frozen turkeys, the David Weekley Family Foundation provided a $10,000 donation.

The food bank strives to use education, advocacy and partnerships to eliminate hunger by the solicitation and distribution of food. To assist those in need, Second Harvest partners with more than 550 nonprofit agencies in six Central Florida counties to provide food for their clients. For more information about David Weekley Homes in Orlando, contact 866-994-3639.