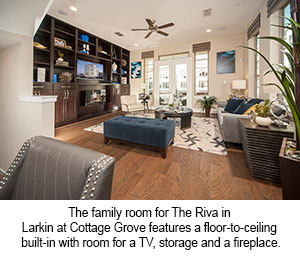 The Riva is open for tours from 9 a.m. to 6 p.m. and includes such designer features as a wood flooring, a dark-wood built-in for the family room with insets for the TV and a fireplace, a second-story balcony, built-in wine cooler in the kitchen and a stand-alone tub in the owner’s bath.

Located at T.C. Jester Blvd. and Larkin Street, just north of I-10, Larkin at Cottage Grove is a private, gated Central Living community with 68 homesites. Buyers can choose from seven three- and four-story floor plans, each with three bedrooms, three full baths and two-car garages. Some floor plans include one half bath.

David Weekley began building in Central Houston in 2008, and has since built new homes in more than 30 communities in and around The Heights, Rice Military, the Galleria area, Washington, Montrose, Midtown, Garden Oaks and the Spring Branch area.

For more information about David Weekley Homes in Larkin at Cottage Grove, contact 832-535-2508.